It is with great sadness that we share the news of the death of Sir John Houghton on April 15th 2020 at the age of 88. Described as “one of the greatest scientist statesmen of our time”, John was knighted by the Queen in 1991.

By Ian and Ellie Bensted 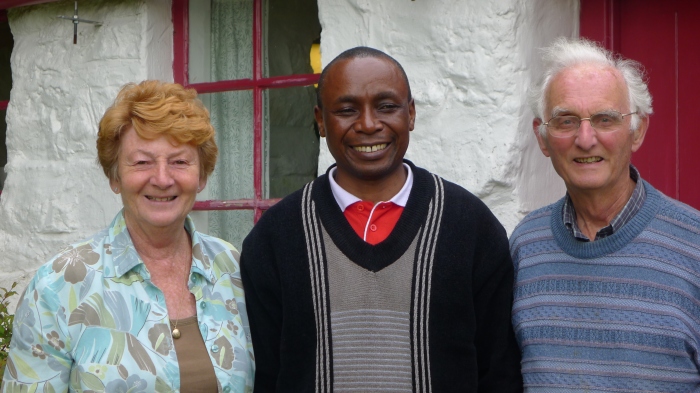 John and his wife Sheila, pictured here in Wales with Bishop Dan Zoreka, Bishop of Kinkiizi, have enthusiastically and generously supported WATSAN for the past 11 years. John took part in our first Walk for Water in 2011, and he and Sheila have been dear friends ever since.

As an Oxford professor and one-time Head of the Meteorological office, the world will remember John for his immense contribution towards the understanding of climate change, beginning with research as early as the 1960s. He continued to spread the message of potential “mass destruction” if no action were to be taken about global warming, with dogged determination to a sceptical world. This culminated in 2007 in his receiving the Nobel Peace Prize, jointly with Al Gore, on behalf of the IPCC (Intergovernmental Panel on Climate Change), as their co-chairman. 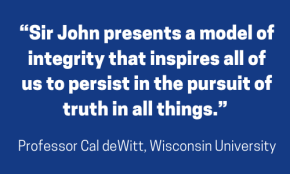 In recent years John became frail, as sadly dementia set in, but lovingly supported and cared for by Sheila, he continued to delight in their garden, the sight of his much-loved Welsh hills, and in walking by the sea, right up until just a few weeks before he died with COVID-19.

A convinced Christian, an elder in the local church in Aberdyfi, Sir John lived an amazingly fruitful life, always putting his faith into practice. John leaves amongst other publications a classic university textbook on climate change Global Warming (5th edition), a book for enquirers into Christianity, “The Search for God – can science help?”, and his very readable autobiography, In the Eye of the Storm, which we warmly recommend.