The Ugandan staff team have implemented a series of new low-yield springs in the last quarter, bringing their exemplary best practice to the processes of community and political engagement, as well as efficient engineering and construction. They discovered that one of the springs, at Mukugwe, was in fact high yielding, reminding us of the hope WATSAN’s projects can bring and the abundance of nature’s resources.

WATSAN operates across two districts of South-West Uganda, and the team has implemented spring protection projects in both areas over the past few months.

In Rukungiri district, new low-yield springs at Rweminyinya, Rwembogo and Kyabugashe are now serving three extremely rural villages. For all these projects, the team has engaged strongly with the community before, during and after the construction aspect, getting buy-in to the existence and maintenance of the new schemes; involving the beneficiaries in carrying out work directly on their project; and formally handing over the facilities to a local committee via a formal commissioning ceremony. In the staff team’s report to trustees, they note that “Speaker after speaker at this function thanked the UK Support Group for their financial consideration in helping communities to access safe and clean water through spring construction”.

In Kanungu district, a spring construction was initiated at Mukugwe (pictured), which is now serving 47 households with 233 people in the community. During construction the team discovered that this spring was unexpectedly high-yielding, with four separate water eyes identified and channelled into the spring. They were able to build the structure in such a way that a pipeline extension could be applied to it in future, potentially forming a mini gravity flow scheme. At the commissioning ceremony for this project, the WATSAN team were especially commended by local community leaders for their productive relationships with local government, and for the ecological credentials of the construction. This included using efficient and up-to-date technology; sensitive disposal of waste materials; and encouraging tree planting around the scheme.

Staff report that guest of honour Bishop Dan Zoreka “thanked in a special way the UK Support group for their routine financial support and for sending in money in a timely manner. He informed members that the donors do not always have the money, but save little by little to help us Africans”.

Projects like these are supported by our regular donors, who have standing orders to WATSAN and enable the staff team to identify and implement small-scale projects. Our thanks to go our loyal regular donors.

Set up a standing order 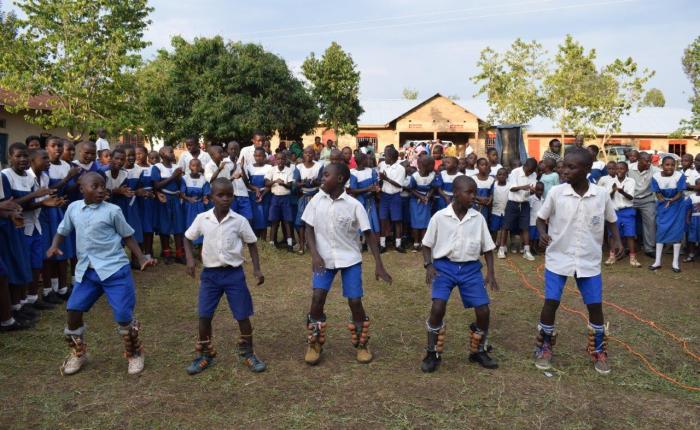 We would like to thank our supporters, many of whom increased their standing orders or set up new regular gifts to WATSAN in response to the difficult news about Tearfund’s withdrawal from our partnership.

In August we announced that our longstanding project partner Tearfund had decided not to renew the Memorandum of Understanding with WATSAN, a decision that they indicated had been a difficult one to take and had nothing to do with NKKD’s performance. This has serious repercussions for WATSAN UK’s ability to fund the team in Uganda as presently set up.

Our staff team are absolutely integral to our success. They have the technical expertise, local cultural and political knowledge, and decades of experience that they bring in order for our work to make an impact, as it has recently on communities such as Kinyasano and Kihihi Hill.

We appealed to our supporters for immediate additional help, in particular in the form of an uplift in regular donations, which would enable us to secure the continuity of the Ugandan staff for the time being, both in terms of core management and our ongoing sustainability programme. We are pleased to report that in response, regular donations from our loyal and generous base of supporters have increased by £2,500 a year, which takes us good way towards our target. We cannot thank our wonderful donors enough for this invaluable support.

Nonetheless, we are still seeking a further £5,500 annually to really secure our position. This equates to just 23 new monthly donations of £20 or more.

If you are one of our amazing regular or occasional supporters, can you help us bring one new regular donor on board? Here are some ideas:

We are so grateful for all of your support of WATSAN’s trustees – all of whom are volunteers. Thank you.

Many of our supporters will know that for many years WATSAN has enjoyed a partnership with Tearfund, who have provided approximately one third of our total funding. This arrangement was underpinned by a Memorandum of Understanding (MoU) between Tearfund and our partners in Uganda, NKKD WATSAN (NKKD).

Without notice, Tearfund indicated to NKKD on 18th May that they will not be renewing the MOU with NKKD, which expired on 31st March 2022, a decision that they indicated had been a difficult one to take and has nothing to do with NKKD’s performance. NKKD has recently completed and commissioned a large scheme at Ruheza, which was funded by Tearfund.

On 23rd June, when WATSAN’s UK trustees were informed, it came as a shock. We expected Tearfund to meet the costs of a new gravity flow scheme at Furuma, from the beginning of June, which would have met serious shortfalls in services to rural communities close to Rukungiri. This would have occupied the NKKD team for the next few months, whilst WATSAN’s UK Support team sought funds for a further project, Kazuru, in a remote and exceptionally needy area on the border with the Democratic Republic of Congo (DRC).

Whether this proves to be a long-term decision or not, it has a serious short-term impact on WATSAN UK’s ability to fund the team in Uganda as presently set up. And it comes at a time of worldwide inflation, as well as a drop in the value of the pound against world currencies. There is a two-fold immediate impact: intended beneficiaries will continue in a state of water and sanitation poverty; and parts of the WATSAN staff team will inevitably have to be laid off.

Hence, we have no alternative but to appeal to our supporters for immediate additional help, as well as looking for new support. An immediate uplift of 10 – 25% in regular donations would enable us to secure the continuity of NKKD WATSAN for the time being, both in terms of core management and our ongoing sustainability programme.

Construction of both the above gravity flow schemes is ready to commence. Given that funding for Furuma is not forthcoming, inevitably this project must now wait. We will look for new individual supporters, and major new support from institutional funders, big and small, to fund Kazuru, our present target project, but we are in competition with many other urgent needs worldwide. One-off donations are needed urgently, with a target of £25,000, towards the £100,000 total scheme cost.

We hope you understand that this is an appeal that we are extremely reluctant to make. Our current predicament and the seriously adverse worldwide environment has pressed us into making this vital approach to our supporters.

Thank you so much for any additional support you can give.

Make a one-off or regular donation to WATSAN

On 3rd July Simon completed the Maratona Dles Dolomites in aid of WATSAN, completing 138km and six ascents in 8 hours and 53 minutes.

WATSAN is incredibly grateful to Simon for his magnificent achievement in completing the marathon, an annual single-day road bicycle race covering seven mountain passes in the Dolomites. Open to amateur cyclists, the Maratona – with 9,000 riders from over 70 nations – is one of the biggest Italian Granfondo bicycle races.

Simon’s personal video of the race can be seen below!

Simon’s fundraising will go towards the construction of a new gravity flow scheme at Kazuru, which is WATSAN’s current target project.

Simon has raised over £400 so far, but we think he deserves more for completing such a gruelling challenge! You can still donate to show your support for Simon and WATSAN via his Stewardship page.

Thanks to WATSAN’s latest intervention, community members at a primary school, child development centre and church are better equipped with facilities and knowledge about how to take care of their health.

The Kinyasano Hill project area consists of three institutions: Kinyasano Boarding Primary School, Kinyasano Child Development Centre (CDC), and Emmanuel Cathedral-Kinyasano. Between April and June 2022, the WATSAN team have been focused on building effective toilet facilities for children and teaching staff, and implementing a huge awareness-raising exercise to get everyone on board with better hygiene practices.

Alongside the construction of two new toilet blocks, WATSAN’s software team carried out a live assessment of the sanitation challenges faced by school pupils, which formed the basis for tailored training and engagement sessions. For example, the team observed that school members were initially not concerned about littering the compound with used toilet paper or sanitary towels. Staff were encouraged to form a school health club to raise awareness of the implications of this, and encourage better-informed behaviours. Pupils were also taught how to wash their hands properly, and how often to wash themselves and their clothes, giving them the scientific background to fecal-oral routes to infection with common ailments such as diarrhea and dysentry.

The engagement process culminated in a commissioning ceremony for the sanitation blocks – a way of formally handing over the facilities to the local community and ensuring they feel responsible for their upkeep. This was attended by Bishop Patrick Tugume of North Kigenzi Diocese.

Read more about the impact of WATSAN’s projects